What does the word devastating mean as it is used in paragraph 3 above?

Which detail from the passage best supports the answer to Part A?

What are three main ideas of this passage?

Which three sentences from the passage best support the answer to Part A?

Read the passage below, then answer the questions that follow.

3. Leatherback turtles can eat twice their own body weight in food per day. They eat soft-bodied invertebrates like jellyfish. They live throughout the Pacific, Atlantic, and Indian Oceans. They are mainly open ocean swimmers. However, they swim to tropical and subtropical coastal regions to mate and nest.

4. The green sea turtle is the second largest sea turtle after the leatherback. They can weigh up to 500 pounds and grow to 4 feet in length. They eat sea grasses, seaweeds, algae and other forms of marine plant life. Their beak is sharp and is used for eating seagrass beds and scraping algae off hard surfaces.

7. These turtles are named for their large head and strong crushing jaw, which allows them to eat hard-shelled prey such as crabs. Loggerheads carry many organisms on their shells like barnacles and crabs. In fact, scientists have identified between 50-100 species of plant and animals hitching a ride on the backs of loggerhead turtles.

8. Many people think that Hawksbill sea turtles are the most beautiful of sea turtles because of their colorful shells. The hawksbill is found in tropical waters around the world. They spend their time in coral reefs, rocky areas, lagoons, mangroves, oceanic islands, and shallow coastal areas.

9. These turtles are named for their narrow head and sharp, bird-like beak. Hawksbills can reach into cracks and crevices of coral reefs looking for food. They eat mainly sponges. Hawksbill sea turtles weigh between 100-200 pounds and grow to 2-3 feet in length.

10. These turtles live in the tropical and some sub-tropical regions in the Atlantic, Pacific, and Indian Oceans. The largest populations live in the Caribbean Sea, Indonesia, Mexico, and Australia. Olive Ridley Sea Turtles

11. Olive Ridley sea turtles are the second smallest sea turtle. They weigh between 75-100 pounds and grow to 2-2 ½ feet in length. They are named for their olive green shell. These turtles are omnivores (meat eaters). They eat a variety of food including crabs, shrimp, lobster, urchins, jellies, and fish.

12. Olive Ridley sea turtles live all over the world, and they are found mainly in warm tropical regions of the Pacific, Indian, and Southern Atlantic Oceans. They spend most of their life in the open ocean.

13. These turtles live and build nests in Mexico, Nicaragua, Costa Rica, Panama, Australia, parts of Africa, and a few beaches along the coast of India.

14. Kemp’s Ridley sea turtles are the smallest of the seven sea turtle species. They weigh between 75-100 pounds grow to about 2 feet in length. They have a triangular shaped heads with hooked beaks and strong jaws. Their favorite prey is crabs. They also eat fish, jellies, shrimp, and a variety of mollusks.

15. About 95 percent of these turtles live and nest in Mexico, but around 5 percent also live in Texas. Until recently, the endangered Kemp’s Ridley turtle almost became extinct in the 1960s. Over the years, strict protection laws protected their nesting beaches in Mexico. These turtles went from only 200 turtles in the 1980s, to about 7,000 - 9,000 turtles today.

16. The flatback sea turtle gets its name from its flat shell, which is different from other sea turtles. An adult flatback weighs 200 pounds and grows to 3 feet in length. The flatback is an omnivore (meat and plant eaters). They eat a variety of food including sea cucumbers, jellies, soft corals, shrimp, crabs, mollusks, fish, and seaweed.

17. They swim in the waters of Northern Australia, Southern Indonesia, and Southern Papua New Guinea. However, they breed and nest only in Australia. Because they live in so few parts of the world, flatback turtles are the least studied of the sea turtle species. 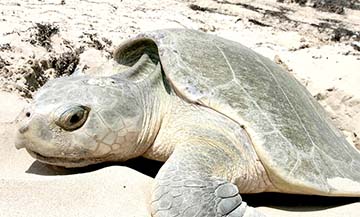 What does the phrase least studied mean as it is used in the passage above?

Which sentence from the section on Flatback turtles best helps the reader understand the meaning of least studied in Part A?