Read this sentence from the passage.

"Seabirds are birds that have adapted to life within the marine environment."

What does the word adapted mean as it used in the sentence?

Which statement from the passage best supports the answer to Part A?

Which statement provides the best explanation of why so many seabirds are killed every year?

Which paragraph from the passage best supports the answer to Part A?

1. Male and female penguins take turns sitting on the eggs and taking care of the babies.

3. Penguins are excellent swimmers, but they can’t fly.

4. Gulls make nests by making a soft spot in the sand near grass, rocks, or logs for protection.

5. Gulls are the state bird of Utah even though Utah is not near any oceans.

6. Most seabirds have the same mate for life.

7. If seabirds had an Olympics, the gold medal for long distance flight would go to the Arctic Tern. Terns fly round trip from the Arctic to the Antarctic and back each year. This is a total distance of over 22,000 miles.

8. The Sea of Cortez is home to the smallest seabird in the world, the Least Storm Petrel which weighs 1 ounce.

9. Sea birds have their own natural built-in sunglasses. Their eyes contain special red drops of oil. This oil acts as a sun filter to help with the glare from the sea and sand.

10. An albatross served as an airplane in the Disney movie, The Rescuers.

11. The albatross is covered with white, black, brown, red, or yellow feathers. The feathers were used for decoration of hats in the past.

12. An albatross has excellent eyesight and sense of smell. It can find prey even in the dark.

13. An albatross can fly 40 miles per hour. It can fly a long period of time without rest.

14. The stormy petrel is the mascot of Oglethorpe University in Atlanta, Georgia.

15. Around 90 percent of breeding storm petrels are found in the United Kingdom, Ireland, and the Faroe Islands (between Norway and Iceland).

16. Storm petrels are brown-black or gray and have white rear ends.

17. Penguins appear the most often in movies. Of all the seabirds, they might be the most lovable.

18. Emperor penguins are the deepest divers. They can reach depths of 870 feet.

19. Most seabirds have webbed feet. This helps them move on land and in the water.

20. Many seabirds migrate thousands of miles a year. They cross the equator and, in some cases, circle the globe. 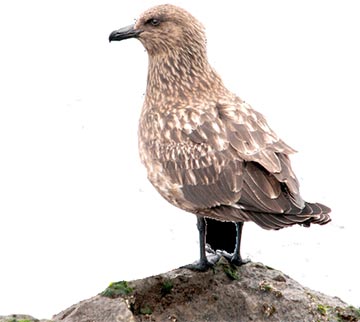 Look at the Merriam-Webster dictionary definition of the word migrate.'

1. to go from one country, region, or place to another

Which dictionary definition best defines the word migrate as it used in the passage?